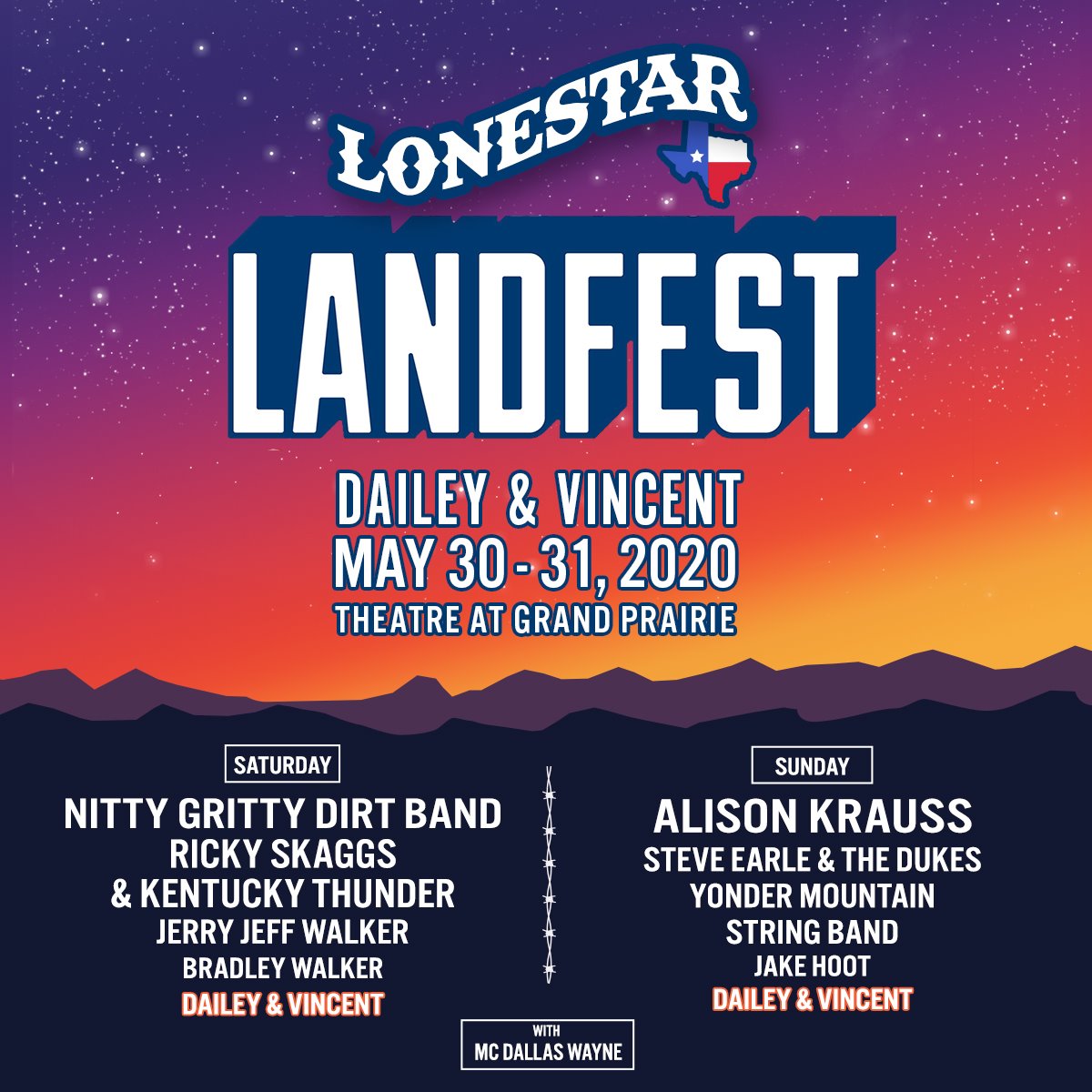 **Lonestar Landfest Postponed until 2021 due to COVID19**

NASHVILLE, TN - Dailey & Vincent are bringing their LANDFEST music festival series to Texas for the first annual LONESTAR LANDFEST, set for May 30 and 31 of this year at The Theatre at Grand Prairie. Tickets went on sale Friday, February 21 and are now available at AXS.com. Along with Dailey & Vincent, the inaugural lineup includes GRAMMY® Award-winners Alison Krauss, Ricky Skaggs, Nitty Gritty Dirt Band, and Steve Earle & The Dukes. Also featured on the lineup are Jerry Jeff Walker, Yonder Mountain String Band, Bradley Walker, and The Voice season 17 winner Jake Hoot. Dallas Wayne from SiriusXM’s Outlaw Country and Willie’s Roadhouse will be the MC for both nights of the festival.

LANDFEST music festival, which began in 2013 in Denton, North Carolina and has since moved to Hiawassee, GA, focuses on bringing together the best of classic country, bluegrass, roots, and gospel music. In addition to the Grand Ole Opry stars Dailey & Vincent, artists such as Josh Turner, The Oak Ridge Boys, Ricky Skaggs, the Bellamy Brothers, and The Earls of Leicester have all graced the festival stage.

In December, Dailey & Vincent announced their partnership with Circle, a new country music and lifestyle television network that is now home to their television series, The Dailey & Vincent Show. The program, formerly with RFD-TV, features live performances by Dailey & Vincent, as well as other celebrity guests (Vince Gill, The Oak Ridge Boys, Jimmy Fortune of the Statler Brothers, Emily West, John Carter and Ana Cash, and Henry Cho, among others).

LANDFEST In The Mountains & On The Lake, Dailey & Vincent's original festival, will take place at Anderson Music Hall at the Georgia Mountain Fairgrounds in Hiawassee, GA September 17-19. This year's lineup includes Charlie Daniels, a Salute to the Grand Ole Opry (a collaboration with The Grand Ole Opry), Dailey & Vincent and more to be announced. Tickets are available in one, two and three-day passes, ranging from $50-$140, and can be purchased athttps://georgiamountainfairground.thundertix.com/events.

Ticket options for LONESTAR LANDFEST include single-day tickets for Saturday and Sunday, as well as 2-day ticketing options, and are available for purchase at http://www.axs.com/series/10905/landfest-lonestar-at-the-theatre-at-grand-prairie-tickets.

ABOUT DAILEY & VINCENT
Grand Ole Opry Members, five-time GRAMMY® award winners individually, three-time GRAMMY® award nominees collectively, four-time DOVE Award winners, and winners of 35 IBMA Awards altogether (including 3-time IBMA Entertainer of the Year Award winners and 3-Time Vocal Group of the Year Award winners), Jamie Dailey and Darrin Vincent, backed by one of the best bands on tour today, are some of the most reputable and elite entertainers in American music; bluegrass, traditional country and gospel music. Now on Season 3 of their nationally broadcast television series, “The Dailey & Vincent Show on RFD-TV,” Dailey & Vincent bring their music to a national audience on a weekly basis.  After a decade spent performing together and with over 1,000 airings of their PBS special “Dailey & Vincent ALIVE – In Concert,” their concoction of fantastically instinctive vocal blends of Dailey’s tenor and Vincent’s reedy harmonies has gained them well-deserved praise for their own distinctive style and worldwide recognition as American Music gold. Their most recent live CD, “Dailey & Vincent ALIVE,” debuted at #1 on the Billboard Bluegrass charts and remained at the top position for over 15 weeks.

For information about booking Dailey & Vincent, email info@ovationag.com or call 615.991.4210.